Writer Nathaniel Halpern (“Legion”) takes inspiration from Swedish artist Simon Stålenhag’s 2014 “Tales from the Loop,” a book of futuristic digital images and transfers the action from Sweden to a fictional Midwestern American town, Mercer, Ohio. From the three episodes I previewed, the pensive tales explores different facets of love in a small town where a supermassive particle accelerator, the Loop, has been constructed and causes breaks in time and parallel universes. 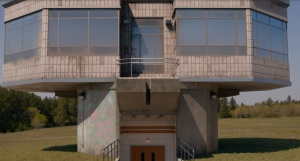 The Loop is visible above the ground as an elevated set of rooms, like a lookout control center. A guard (Ato Essandoh) allows people in and out. From the number of people lining up for work each morning, it’s obvious that the facility is predominately underground. Inside, there’s a curious black sphere called the Eclipse.

Amazon Studio provided critics with three non-sequential episodes, the first the pilot, the fourth (“Echo Sphere”) and the sixth (“Parallel”). The stories are connected by The Loop and the people involved, but each story seems self-contained.

In the pilot, Halpern allows a talking head (Jonathan Pryce as Russ) introduce and explain the premise of a machine built to unlock the mysteries of the universe. There’s an odd disconnect between the world we see in the pilot and the large robots that litter a wintry landscape. Russ is one of the founders of the Mercer Center for Experimental Physics. 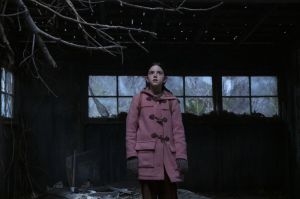 Russ is only a peripheral character in the pilot. Here the focus is on a small girl in a one-room school, Loretta (Abby Ryder Fortson), who is learning math and we follow her as she wanders about a wintry forest in her pink coat. Her single-parent mother, Klara (Elektra Kilbey), and their house mysteriously disappear. Wandering in search of them, Loretta meets a young boy, Cole (Duncan Joiner), who helps her and takes her to his home for shelter. Cole is the youngest son of Loretta Willard (Rebecca Hall) who we first see  arguing with her father-in-law, Russ.  Loretta, a gifted physicist, is married to George (Paul Schneider). The young Loretta never finds her mother, but she discovers something about herself.

In the fourth episode, “Echo Sphere,” the focus is on Russ and his relationship with his grandson, Cole. Russ is older and reflects on his life, apologizing to Loretta, but mostly he builds a relationship with Cole. On one night, Cole  gathers fireflies, but Russ notes to his wife Klara (Jane Alexander), Cole forgot to punch holes in the jar. The fireflies die, but Russ replaces them while Cole sleeps. Russ also takes Cole through the forest, passing a dead deer to visit a rusted echo sphere. By looking into it, Russ tells Cole one can see the future.  Perhaps Russ has already seen his but Halpern is more interested in what Cole finally sees.

In “Parallel,” the guard, Gaddis,  who Cole and Loretta asked for help in the pilot, is fixing a curious floating farming machine and a blip in time causes him to journey to someplace familiar but unfamiliar. There he meets himself, but this version is not a lonely man who can’t seem to form a connection. This version lives in a beautiful house surrounded by acres of land and has a handsome life partner. The guard finds his loneliness dispelled by this version of himself and yet he is cut off from the Mercer community, being hard to explain. His friendship with his parallel universe self is endangered as the guard finds himself attracted to the lover of his parallel universe version. The question of fidelity arises, like a mythic conundrum.

Scored by Paul Leonard-Morgan and Philip Glass, the three episodes are thought-provoking and the cinematography focuses on the strange beauty of Mercer, both in and outside the town. There are hints that this isn’t really our world as large bipedal robots and curious crop machines seem to have been left to rust away. You won’t be asked to mentally wrestle with physics, but rather to ponder the missed opportunities and ultimate sadness of ordinary life.

From the IMDB listing, the episodes will follow Loretta, her sons Cole and Jakob (Daniel Zolghadri).  Hall appears in all eight episodes, all of which were written by creator Halpern. Joiner and Zolghadri in seven.  It is unclear how much explanation we’ll get about the Loop and the Eclipse or into the exact working of Mercer Center for Experimental Physics. The three episodes preserve the mystery and suggest there’s something more and each makes us want to watch the smaller characters, wondering about their stories. Even the mystery of places like the “haunted” house from the pilot, beg to be further explored.

While some have compared “Tales from the Loop” to “Stranger Things,” there are no frightening monsters from another dimension and this isn’t teens under attack.  “Tales from the Loop” exists in a world a slight step off from our own reality that forces us to consider the emotional ties within our lives and the isolation we experience and share in our journeys through life. “Tales from the Loop” seems to perceive life as a lovely tragedy that we all share and that we all are connected to this sad cycle of earthly life.

“Tales of the Loop” premieres on Friday, 3 April, streaming on Amazon Prime Video.

Follow The Dragon Lady Files on WordPress.com
Join 8,623 other followers