‘My Hero Academia: Heroes Rising’: Students Rise to the Challenge ☆☆☆

In the second feature length film based popular “My Hero Academia” manga by Kōhei Horioshi, the young high school heroes get a chance to prove themselves by taking charge of hero work on a small island. Even if you’re unfamiliar with the series, you’ll have fun, especially if you get the flash, foam snow and white clouds of 4DX.

The “My Hero Academia” started as one of the manga in “Shōnen Jump” in 2014. In this world, about 80 percent of the human population possess super powers which are called “quirks” in English (個性, Kosei). The main character, Izuku Midoriya has always wanted to become a hero, but he was born without a quirk. He’s been picked on by the determine Katsuki Bakugō; both of them idolize the professional hero  All Might.

All Might it turns out was also born quirkiness. In real life he is a skinny, haggard looking guy but with his quirk, One For All, he assumes a muscle-bound form. Each possessor of the One For All, must pass on his power to another and All Might chooses Midoriya.

Before one can become a professional superhero, one needs to get training. Both Midoriya and Bakugō enter U.A. High School and become members of Class 1-A.

The plot has Midoriya accompanying All Might to “I-Island, a manmade island that floats in the ocean where an international group of scientists reside to do research on quirks and people with superpowers. All Might has a reunion with his friend David Shield. Shield has a daughter, Melissa, to whom Midoriya is 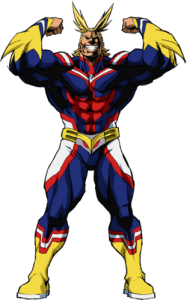 Main characters of Class 1-A:

Shoto Todoroki ():A young man with a Beatles type haircut. One side is white and the other is red. He has heterochromia iridium with one eye a bright blue and the other dark gray.

Momo Yaoyorozu ()/Everything Hero: Creati:A teenaged girl with long black hair that is usually pulled back into a spiky ponytail

A short young man with purple and black balls on his head.

A petite girl with short hair. flexible, plug-like earphone jacks hanging from each of her earlobes at the end of two thin cords, which act like extra limbs;

Denki has relatively short blond hair, parted to the right with a black lightning-shaped streak on the left of his side fringe, which is angled so that it partially obscures his left eye.

“My Hero Academia: Heroes Rising,” which was released on 20 December 2019 in Japan, has Midoriya (voiced by Justin Briner in the dubbed version) and the 1-A class being sent to the small island of Nabu. Although they are high school students, they will be taking over the hero duties as the island’s hero has retired.

The class organizes a call center and fields a variety of calls, most of them mundane, but the islanders show their appreciation by bringing them a beautiful feast. All seems to be going well despite an obvious conflict between Midoriya and Bakugō (voiced by Clifford Chapin). Bakugō is determined to prove himself as the number one hero and is constantly putting himself in adversarial competition with Midoriya.

One of their calls is from Mahoro Shimano (島乃 真幌 Shimano Mahoro) who claims her younger brother, Katsuma, is lost. When Midoriya arrives, she complains that he took too long to find her brother. Katsuma wants to become a hero, but is discouraged by his sister.

On the main island of Japan, Honshū, there have been some suspicious attacks on the Pro Heroes. One of the people attacked is the father of Majoro and Katsuma who has been working away from home, driving a truck. The villain is this movie, Nine (Johnny Yong Bosch), is collecting quirks, draining them from the superheroes to add them to his own arsenal. Katsuma’s father has a quirk that helps regenerate cells, but because of his blood type, this quirk has a limited usage. His son, Katsuma, also has that quirk, but his blood type makes him the perfect target for Nine.

Nine and his gang invade the island and different groups of student heroes attempt to defeat them while protecting the islanders, giving all the members of the class to use their quirks and work together. When it become apparent that Nine is after Katsuma, Midoriya and Bakugō attempt to protect him. Eventually, the Pro Heroes arrive, but not before Midoriya and Bakugō work both apart and then together and Midoriya attempts to sacrifice himself to save Katsuma and the world.

With 4DX, there’s wind and water to put us in the environment. When the smoke and flashing lights are added to the final battle scenes, the fun factor is increased as well as the feeling of chaotic crisis. We know that the heroes will triumph and 4DX makes the journey even better. While I usually prefer the subtitled version, the dubbed worked well enough. 4DX makes this more of a feature length amusement ride and “My Hero Academia: Rising Heroes” is ideally suited for the situation.

Follow The Dragon Lady Files on WordPress.com
Join 8,660 other subscribers