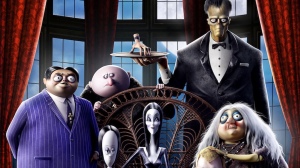 In 1938, when cartoonish Charles Addams created the fictional household that would eventually be called The Addams Family, the Goths were still a German tribe that invaded the Roman Empire. The Addams, in their full extension of relations and pets, would still take time to form: The disembodied hand called Thing would be added in 1954 and Cousin Itt in 1965.

The TV show which starred John Astin as the father and Carolyn Jones as the mother would only last two seasons, from 1964 to 1966 for.64 episodes.  The family are always kind and courteous, but also oblivious to the contrast between what they perceive as normal behavior and what outsiders view as odd, weird or downright spooky. Visitors usually become so freaked out, they are never the same. The show, of course, gave us a theme song.

Their house is a museum
When people come to see ’em
They really are a scream
The Addams Family.

So get a witch’s shawl on
A broomstick you can crawl on
We’re gonna pay a call on
The Addams Family.

A music critic used the term “Gothic rock” to describe Jim Morrison in 1967 and by the time the first live-action movies came out in 1991, Goths were a subculture. One of the challenges the 2019 animated feature, “The Addams Family,” faces is the current culture embraces goth. It’s no longer ooky and being spooky isn’t a concern.

For those unfamiliar with David Cassidy, “Come on Get Happy” was the theme song for “The Patridge Family,” (1970-1974). For this unfamiliar with Charles Addams’ drawings, the 3D animated version is more faithful to his characterizations.

In 2019, “The Addams Family” incorporates some sunny pop songs and are fully cognizant that they are not welcome in the neighborhood. The movie begins with a wedding and a mob driving them out of the old country until they find themselves in New Jersey, because “no one would be caught dead” there. They takeover an abandoned asylum, taking in

The Addams Family lives alone happily enough with the children home-schooled. Pugsley (Finn Wolfhard) is being prepared to pass an Addams Family ritual, Sabre Mazurka (a mazurka is a Polish dance). Gomez (Oscar Isaac), his father, and his Uncle Fester (Nick Kroll), are not satisfied with his progress.

Pugsley’s older sister, Wednesday (Chloë Grace Moretz), is intrigued by the outside world. A new planned community development called Assimilation has drained the swamp, causing the fog that surrounded their home to lift. A red balloon drifts over from the community’s opening to the Addams’ estate, piquing Wednesday’s interests. Wednesday insists on going to the nearest public school.

Initially picked on by popular mean girl Bethany (Chelsea Frei), Wednesday finds allies in Parker Needler (Elsie Fisher) and her friends, twin sisters Layla and Kayla (Pom Klementieff). Parker is the neglected daughter of the reality TV personality and single mom, Margaux (Allison Janney). Margaux has gambled all her money on opening this perfect pastel-colored community of conformity and feels threatened by the less than perfect and gloomy estate up the hill. If Wednesday’s attendance at a public school is puberty induced rebellion, Parker, influenced by Wednesday, goes goth to rebel against big-haired Margaux’s vision of suburban perfection. The impending Addams Family gathering to witness Pugsley Sabre Mazurka, further hinders Margaux’s plans so she at first attempts to remodel the Addams’ mansion and, when that fails, to drive them out.

This is one of those family films where the youngsters, in this case, mostly Wednesday, but later Pugsley, too, are more in tune with the time and will rescue their family. There will be a happy ending and if the real monster is conformity, the script does find a way to drain the venom from the villains in time for a happy ending.

“The Addams Family” has lost some of its punch with the rise of goth culture into the main stream and this  animated feature is more interested in violent explosions than kooky characterizations. Granted, a lot of that territory has already been explored by better and funnier animated features like the “Hotel Transylvania” series, but with its initial success, “The Addams Family” is already slated to return and perhaps that outing will find more pleasure in the little quirks and family dynamics.

Follow The Dragon Lady Files on WordPress.com
Join 8,623 other followers