Reading about an attempt to help small Jewish enclaves in the Southern US states (Alabama) survive, reminded me of the play “Driving Miss Daisy.” Often dismissed and referenced in a derogatory fashion, the play became an award-winning movie in 1989 with Jessica Tandy and Morgan Freeman. Currently, you can watch two versions on Amazon Prime Videos, the Tandy-Freeman movie and a filmed play Angela Lansbury and James Earl Jones. 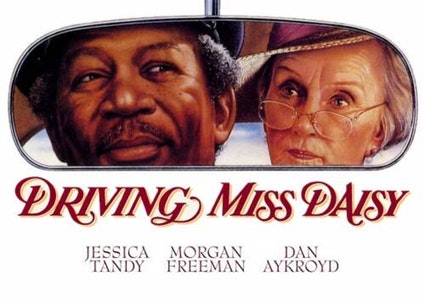 Alfred Uhry’s Pulitzer Prize-winning play, “Driving Miss Daisy” came to television in 2015 with Angela Lansbury and James Earl Jones with four-time Tony Award winner Boyd Gaines reprising his Broadway role as Daisy’s son Boolie (Gaines was also in the West End revival). For those most familiar with Lansbury from Disney voice acting or the TV series “Murder She Wrote,” Lansbury has an honorary Oscar, an Olivier Award, five Tony Awards and six Golden Globes.   Jones also has two Tony Award, a Golden Globe, a Grammy and two Emmys. This is an exceptional cast. He played Hoke opposite Vanessa Redgrave in the 2010 Broadway cast and the West End revival.

Directed by David Esbjornson for an Australian audience, the play doesn’t bother with detailed sets. There is a majestic curving staircase to one side and on the other a revolving piece of stage adds chairs and a steering wheel to represent the car.  The play begins in 1948 with Boolie confronting his mother about her driving.

The movie won Best Picture, Best Actress (Tandy), Best Makeup and hair and Best Adapted Screenplay. Freeman had played Hoke in the original Off-Broadway production. The movie begins with Miss Daisy and her car accident. It’s minor, but clearly shows that she shouldn’t be driving herself.

The play gives more emphasis to the Jewishness of Miss Daisy although this is readily apparent in the movie as well. Hoke does at one point refer to Miss Daisy as “white,” but she is keenly aware of her Jewishness and her son and daughter-in-law’s attempts to assimilate into a predominately Christian white society.  While her son and daughter-in-law host a Christmas party, most if not all the attendees are Jewish. Miss Daisy notes that Hoke may be the only Christian there.

One might cringe at Hoke when he initially speaks about preferring to work for Jews despite what people say about them. Both the play and the movie have Miss Daisy confronting the change in her relationship with Hoke. Hoke demands that he be treated as a person when he has to use the bathroom and when he receives a last-minute invitation to see Martin Luther King Jr. With MLK, Miss Daisy also confronts the continued fears of her son for his business and her own questionable etiquette.

When Miss Daisy and Hoke travel to Mobile, Alabama, Miss Daisy remembers her first time to board a train was in 1888. She was 12. That would make her 24 in 1915. Thus when Miss Daisy is dismayed at the 12 October 1958 bombing of the Hebrew Benevolent Congregation, the oldest synagogue in Atlanta. Miss Daisy asks Hoke who would do such a thing, Hoke responds, “You know as good as me. Always be the same ones.” Hoke remembers a lynching, Miss Daisy is likely recalling the 1915 lynching of Leo Frank in Atlanta.

Uhry was well aware of the lynching. According to the NY Times:

In writing ”Parade,” Mr. Brown worked closely with Mr. Uhry, who grew up in Atlanta and whose great-uncle owned the pencil factory run by Leo Frank. Just about every time Mr. Brown sat down to write a song, he was working from a text by Mr. Uhry, whom the composer described as a generous and kind partner.

Uhry wrote the book for a musical “Parade.” The reaction of the city of Atlanta was different this time.

According to a website on Georgia history, the Jewish population “feared the rise of anti-Semitism reminiscent of the Leo Frank lynching.” There had been three other bombings of synagogues and no one was found guilty of the Hebrew Benevolent Congregation bombing.

Hoke talks about it being all the same. Being 12 years younger than Miss Daisy, he would have been 12 at the time of Leo Frank’s lynching. Whether or not he remembers Frank’s lynching is left unsaid.

“Driving Miss Daisy” is about two minorities and how they find a place within WASP society in Atlanta. The difference is that while African Americans were a minority in the US (in 1940 about 9.7 percent), they were a large majority in Atlanta (34.6 percent in 1940). By 1970 (the play and movie end in 1973), African Americans had become the majority with 51.3 percent. Jews were a minority in the US (about 2.2 percent) and Atlanta (2.2 percent in Atlanta in 2012). Jews in Atlanta could try to pass as white, but as Boolie expresses there’s always that lingering prejudice so they have to be careful about who they support or seem to support in public (e.g. Martin Luther King Jr.).

As an old woman, Miss Daisy is further marginalized, without the support of a network of friends. Perhaps, like her husband, they have all died just as her housekeeper/cook does during the play (1962) and she does talk about her daughter-in-law’s father who has passed away. She doesn’t approve of the younger generations adopting of Christmas decorations and celebrations nor believes that others of her generation would either, and that sets her further apart in a world that is increasingly dominated by a younger generation.

According to the Washington Post article, Jewish communities in the South are struggling and dying off. Not so for the black community which is rising in influence despite lingering prejudices.

“Driving Miss Daisy”  (1987) is one of three theatrical works that Uhry wrote about Jews in Atlanta. The other two are “Parade” (Tony Award for Best Book of a Musical) and “The Last Night of Ballyhoo” (1996) (Tony Award for Best Play). All three mention differing attitudes toward Northern Jews, most pointedly “Parade” because Leo Frank was raised in New York (although he was born in Texas). These plays are a reminder that diversity has always been more than black and white, even in the Deep South.