The story of Brian Banks is a local one, but echoes national concerns about believing rape survivors in the wake of Christine Margaret Blasey Ford accusations against Supreme Court nominee Brett Kavanaugh.  Stephen Farber, writing for the Hollywood Reporter wrote, “The only thing wrong with ‘Brian Banks,’ a powerful film that had its world premiere at the LA Film Festival, is the moment at which it appears.” While this film, which premiered at the Los Angeles Film Festival,  might, just like the real Brian Banks, face what Farber termed “definitely swimming against the current,” people haven’t forgotten about Banks. 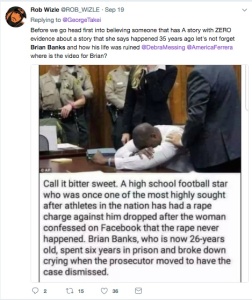 There actually couldn’t be a better time for this sensitive and emotionally intelligent movie. Is there an adult male living in Los Angeles who hasn’t heard of this case? Banks’ case and sentencing were compared to that of Brock Turner in 2016. Turner was caught in the act with two witnesses. Banks was accused by a classmate; there were no witnesses or corroborating evidence. Turner got six months in jail and three years probation. Banks got five years in prison and five years probation. Peters is white. Banks is black.

Born and raise in Long Beach, Banks was a junior at Long Beach Polytechnic High School who, like Turner, had a promising athletic career ahead of him. He was being scouted and had already been promised a full-ride at USC (full disclosure: I got my second master’s at USC). Banks future was derailed when a classmate, Wanetta Gibson, accused him of rape. He pled “no contest” in 2002 and, although he expected probation, he got jail time, followed by probation.

The movie “Brian Banks” begins with a young kids at a park. From high school to current times, Banks is played by Aldis Hodge and he tells us, “I remember my first game of football. I felt I could do anything. I felt free.”  Of course, we know that freedom will come to have more meaning for the young Banks.

You might remember Hodge fondly from the TV series “Leverage” (2008-2012).  More recently, he’s had supporting roles in “Hidden Figures” (2016) and “Straight Outta Compton” (2015).  Hodge also was the male lead in the WGN TV series “Underground,” a series showed how the institute of slavery in the Deep South creates a moral swamp that made ethical monsters of everyone involved.

The underlying fear around #MeToo and #IBelieveSurvivors, is that believing anyone and everyone can result in the ruination of innocent men. If you read the comments under #MeToo-related articles, this is a recurring theme–false accusations and a social media mob-style metaphorical lynching. Some confessionals such as the incident regarding Aziz Ansari were little more than a bad date or, in the case of Chris Hardwick, a very bad relationship with a cheating ex and the cheating ex writing about how bad Hardwick was. Neither confessional indicated anything that would be considered criminal.

Even before Ansari and Hardwick, the worries were there and proven real. ESPN produced the 2016 documentary “Fantastic Lies” about the Duke case where a stripper accused the lacrosse players of rape in 2006. (“Fantastic Lies” should be seen with the 2016 The Hunting Ground)  In 2014, Rolling Stone published an article about the initiation gang rape during Phi Kappa Psi fraternity party at University of Virginia. In the case of the lacrosse players, the lead prosecutor was forced to resign and later disbarred. Although the Poytner Institute named the Rolling Stone article the “Error of the Year” in journalism, the writer was not fired. Rolling Stone ended up doling out legal settlements with the university and the fraternity members.

In the movie, Banks meets Kennisha Rice (Xosha Roquemore) in the hall way and goes to another building, through a long hallway past full classes and open doors, downstairs to a private location known as an make-out spot. They kiss, but are interrupted before they can do more and Banks abruptly leaves the disappointed Rice. Rice later passes a note to a classmate: “he picked me up and put me in the elevator and he took me down stairs and he pulled my pants down and he rapped me and he didn’t have an condom on and I was a virgin now Im not.”

Banks receives a lackluster defense and poor advice. He takes a plea bargain under pressure and without access to his mother. While he says, “No contest,” and expects probation only, he gets a harsh sentence. At first, he’s in a juvenile detention, but later he’s transferred to an adult prison where he faces intimidation tactics. He reacts with brutal force and gets solitary confinement. What saves him is  a one-time exchange with Jerome Johnson who teaches a course for young prisoners and tells him “your despair can become a doorway” and that “all you can control in life is how you respond to life.”

Out of prison, he realizes the dimensions of his probation. He can’t find work. Sometimes work or even pleasure might take him too close to a playground which violates the terms of his probation. He hears of the the California Innocence Project, but even when he convinces the founder, lawyer and professor Justin Brooks (Greg Kinnear), to take the case, there are legal technicalities. They need new evidence and that’s hard to come by until social media comes to the rescue. 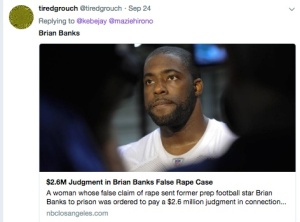 Director Tom Shadyac gives us enough time to understand the gravity of the situation and the impact on the young man. Doug Atchison walked a fine line on the issue of false accusations and bolsters the film against repercussions with strong women in Banks’ mother Leomia (Sherri Shepherd). Banks’ accuser isn’t a caricature of evil, but one of shifting morals with a sullen and angry mother (Monique Grant) who likely doesn’t know the truth. Under the direction of Shadyac, the performances of Grant and Roquemore don’t show either the mother or daughter as greedy and opportunistic. And this doesn’t feature Kinnear as the white savior lawyer. The focus is on Banks and how he saved himself through faith and convincing good character. 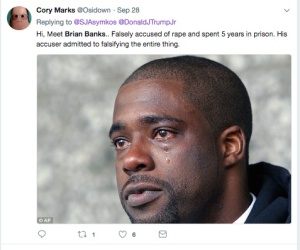 “Brian Banks” was given the Audience Award for Fiction and it’s a happy-ending tear-jerking biopic that ends by quickly informing the audience of other victories for the Innocence Project. Brian Banks is already part of the national conversation of #MeToo, #HimToo, Brett Kavanaugh and Christine Blasey Ford. And this movie, should be too.