Movies to Celebrate the Eclipse Across America

The eclipse is near (21 August 2017) and there’s still time to chase it down, get in the movie mood or order something to help set it in your sights for your own movies. It is, however, a couple hundred years too late to use a total solar eclipse as the means for appearing magical unless you get into a time machine and end up somewhere like King Arthur’s court. 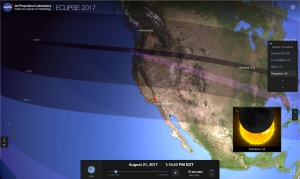 The last time a US state had a front-row seat to a total eclipse was Hawaii in 1991.

There are three types of solar eclipses: partial, hybrid, total and annular. Most of the US will be able to see a partial eclipse, when only part of the sun is covered by the moon as if some celestial being is taking a bite out of the moon. An annular eclipse is when the moon covers the center of the sun, but leaves a fiery golden ring exposed. A total eclipse is when the moon completely covers the sun with only the corona visible. A hybrid is something in between a total and annular.

Wherever you like, check out the handy app that NASA has to know the exact time and exact appearance using its free eclipse app, Eyes on the Eclipse (eclipse2017.nasa.gov/nasas-eyes). You can even check out views from other places in the solar system.  If you’re lucky, and you live in the path of the total eclipse, then you’ve probably heard about preparations. Some of NASA’s current and former employees have been planning for over a year, getting in before the prices skyrocketed.

Dr. Tom Spilker, who worked at JPL for 21 years as a principal space flight mission architect, and his wife, Dr. Linda Spilker, a Cassini mission project scientist, are going to Boise solar eclipse party with family and friends. For Spilker, this is his second eclipse viewing and Linda’s third eclipse chasing vacation. Weather resulted in disappointment for Linda; hopefully the third time’s a charm.

Spilker was luckier when in 1979, he was in the February cold of Helena, Montana. He hadn’t met Linda at that time and went chasing with colleagues who were, like him, working and living in Houston at the time. At 7 o’clock on the morning of the eclipse, the weather was completely overcast, “except for a little hole, south or southwest.” They drove to get underneath that hole but “five minutes before, all the clouds we could see had dissipated” for a beautiful view.

His advice: Go for dry climates. That’s why his choice is Idaho (Boise) over the humid inland St. Louis, Missouri or the coastal Newport or Salem, Oregon.

Kevin Hussey, manager of the Visualization Technology Application and Development group at JPL-NASA, also chose Idaho for a special NASA-sponsored event. In Idaho Falls, collaborating with the Museum of Idaho, Hussey will be part of a four-day weekend long event that includes a speaker series (NASA’s director of the Planetary Science Division, Dr. James L. Green; lead study architect for JPL’s Innovation Foundry’s A-team, Dr. Randii R. Wessen; director of Astrovisualization at the American Museum of Natural History in New York, Carter Emmart and Hussey)  and movies (“Apollo 13” on Friday, “The Martian” on Saturday and “Contact” on Sunday) screened in Idaho Falls’ 1919-built Colonial Theater.

In case of cloudy weather, NASA has its own back up plans–planes will fly above the cloud level.  That as well as the importance of solar eclipses for scientists is explained by a new PBS documentary,”Eclipse Over America” (Monday, Aug. 21, 9 p.m.). Total eclipses allow scientists to view and study the sun’s corona and its solar flares. The NOVA event includes live Facebook event from near Irwin, Idaho, and footage from that day’s eclipse will be included in that evening’s “Eclipse Over America.”

If you act quickly, you can also try buying your own equipment from the Irvine-based Meade Instruments (which is participating in Astro-Con in Casper, WY Aug. 16-19). Just for this year’s total solar eclipse, the company is offering affordable EclipseView binoculars ($69.99) and white light telescopes ($79.99 to $189.99). The EclipseView line comes with solar filters that can be removed for usage at nighttime. For more money, a Meade Coronado personal solar telescope which is allows you to see only hydrogen-alpha light will give you more detail.

NASA warns that is it never okay to look directly at the sun and, in addition, there are some unsafe eye wear being sold (https://eclipse2017.nasa.gov/safety).  To be safe, refer to American Astronomical Society (AAS) Reputable Vendors of Solar Filters & Viewer. Check with your local children’s museum for events and activities if you can’t head up to Idaho Falls or Casper, WY.

Eclipses figure in folklore, fiction and films. Some cultures thought that the sun was being eaten from creatures like bears, frogs, dogs, wolves or dragons . In Chinese and Japanese, the word for solar eclipse is literally “sun eaten.” In Japanese mythology, the sun goddess Amaterasu was so angry with her brother, she didn’t slam doors, but she hid herself away in a cave. The other gods got her back out by having a party that included drinking and dancing.

On film, there have been three adaptations of Mark Twain’s 1889 novel, “A Connecticut Yankee in King Arthur’s Court,” including one that starred Bing Crosby. Other fictional films with solar eclipses (“The Twilight Saga: Eclipse” and “Into the Woods” feature a lunar eclipse) include: