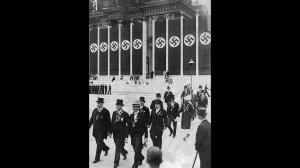 Is there any national government that says in public or private, “Let’s take a lesson out of Hitler’s playbook?” I’m going to guess that most countries would at least publicly respond with a vehement, “No,” followed by faces paler white than a Siberian snow. Watching “The Nazi Games” and “Hitler’s Olympics” you’ll begin to question that wisdom.

What does one think of when they think of the Olympic Games? There’s the construction of new and unique stadiums. There’s ceremony. There’s the torch relay. Yet the documentary, “The Nazi Games,” informs us these are relatively new. “The modern Olympics are known for monumental arenas, pomp and spectacles” and, an in a sense, the Olympics are a “global marketing phenomena.” 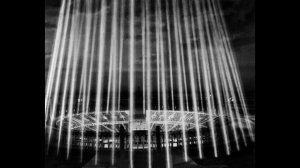 Yet surprisingly, we learn this wasn’t always true. The modern Olympic era began with the Berlin 1936 Summer Olympics when “the Olympic legacy has changed forever.”

The 1936 games created a blueprint that all subsequent games would follow and the road to hosting the Olympics begins with lobbying. The Germans began in May 24, 1930 at Lake Grenau where the German Olympic committee entertained the Olympic officials with an event staged especially for them that required 2,000 row boats.

Professor David Clay Large, a historian, is quite sure the IOC was influenced by this show. No other country had taken such an approach and the IOC was astounded by the German presentation. Yet the glad-handing, wining and dining became standard practice.

Carl Diem and Theodor Lewald were co-chairmen of German delegation, and delighted that their plans had worked. They traveled to the Games in Los Angeles, where due to the Great Depression, the U.S. organizers found it “impossible to raise the money needed to make the games as great as initially planned.” The two Germans are sure their Berlin Olympics will be bigger and better.

Six months later, the Nazis came into power. According to Professor John Hoberman, “the essence of fascist foreign policy is war.” Sports became about the preparation of soldiers and has a real utilitarian value for the master race.

Because black and Jewish people “were not human beings,” competing with them in athletic events was like “you were competing against an antelope or a deer,” author Guy Walters explains.

The IOC was alarmed at Hitler’s rhetoric, but there were “deep, deep roots of Nazism and Olympism” and both Sparta and Nazi Germany believed in eugenics. Although both Lewald and Diem had Jewish connections, they still pushed for the Olympics. Lewald became “a secret agent for the Nazis.”

Token Jews are allowed on the teams and an American fact-finding team without a single German-speaking person comes back from Germany with the assertion that there is no discrimination against Jews in German sporting life. It was, of course, farcical.

The Berlin Games of 1936 were the most expensive of that time and Walters calls it “the first global media happening” and as such the first time that the Olympics could be globalized, nationalized and politicized. There is “no doubt that Berlin is at the root of the modern Olympics.”

“Hitler’s Olympics” is the grimmer of the two with a narration that predicts the doom in contrast to sometimes jubilant archival footage that is bookended by talking heads.

This film begins with the end of World War I, looking at the economic and political situation for Germany when a “whole generation of men had been effectively wiped out.” The  Treaty of Versailles didn’t treat Germany well and the 1924 Olympic Games saw Germany banned from competition, so bitter were the memories

The Berli Olympics would be “an operatic production,” a great opportunity because “propaganda for the Nazis is not just an instrument of government. It was the air they breathed; it was the medium of government.”

Lewald and Diem are also both mentioned but this documentary puts more emphasis on the athletes and Germany itself, mentioning people like long-jump champion Margaret Gergmann-Lambert who was prevented from competing and replaced by a Dora Ratjen who authorities later discovered was a man. Bergmann-Lambert is still alive and was interviewed. Field and track champion Lilli Henoch was prevented from competing and later killed by the Nazis during World War II. Helene Mayer, an Olympic medalist in fencing, returned to Germany to protect her family, and became the only German Jew to win an medal at the Berlin Olympics.

Jesse Owens and his connection with Luz Long is also mentioned and Owens impact on the games is a major portion of this 44-minute documentary. While Hitler was prejudiced so was Avery Brundage, the leader of the American Olympic committee. Brundage would continue to assert his influence over the Olympics for years to come. One of the organizers of the Berlin Olympics would commit suicide, one that was covered up to protect the Nazi image.

After the Olympics, Hitler wanted to plan a bigger stadium and a permanent home for the Olympics because he was certain that the Nazis would conquer the world. Instead, the vision of a bigger and better Olympics became the lasting legacy of the Nazis. If you look at what happening in Rio now, in the summer of 2016, and remember the disaster that was the Sochi Winter Olympics, you have to wonder about the wisdom of this vision of the Olympics and if this ideal should continue.