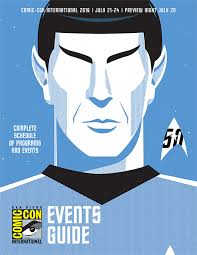 You could tell by the cover art for this year’s San Diego Comic-Con that the 50th anniversary of “Star Trek: The Original Series” was much in the mind of pop culture and science fiction fans. If you weren’t able to make it to SDCC, there are still ways you can celebrate.

If you got a friend who’s a Star Trek fan and a book lover, I recommend Insight Editions’ “Star Trek: Redshirt’s Little Book of Doom” ($14.99) as a humorous gift. Only “Star Trek: The Original Series” fans will get this guy’s predicament. If you’re interested in Star Trek cosplay, you’ll want to get “Star Trek: Costumes, Five Decades of Fashion from the Final Frontier.” The book does not include T’Pring’s (Arlene Martel) silver dress from “Amok Time,” but otherwise has a lovely pictorial rundown of the good (uniforms from the movies) and the bad (the tacky belly dance costume of the Argelian Kara from “Wolf in the Fold” episode). A pseudo serious humor book for Vulcans and their fans would be the “Hidden Universe Travel Guide: Star Trek Vulcan” ($19.99). That book can also help you be more Vulcan at your next Star Trek gathering and it was a great read while I was waiting for the Juno insert at the NASA Jet Propulsion Lab.

If you love beer, Shmaltz Brewing Company made a special 50th Anniversary Ale: The Trouble With Tribbles. As a non-drinker, I was introduced to Darren Benjamin through a friend. Benjamin, whose favorite beer is Harp Lager, commented via FB messenger that the ale is “a golden lager, smooth and malty with hints of citrus and almost a white wine aftertaste. A little Trek Easter Egg: The beer is made triticale which is a grain and in the episode ‘Trouble with Tribbles,’ the tribbles ate quadrotriticale.”

Benjamin, who now works at McMullan’s Irish Pub in Las Vegas, was formerly a bartender at “Star Trek: The Experience.” The Golden Anniversary Ale: The Trouble With Tribbles will be available at the “Star Trek Las Vegas” convention at the Rio Hotel & Casino from August 3 – 7, 2016. In fall 2016, Shmaltz brings its second Star Trek Golden Anniversary Ale: Voyage to the Northeast Quadrant to “Mission New York” at the Javits Center from September 2 – 4, 2016.

Something I did try was Mac Cosmetics special Star Trek anniversary collection. Mac Cosmetics had artists ready to apply makeup on you for free demos. The emphasis of this limited edition line that will be on sale in September is shimmery glamour. As a lover of all things purple, the Kling-It-On deep purple with fine pink glitter frost was my favorite although the Where No Man Has Gone Before pink with gold pearl got good reviews from my husband ($18.50). That superstick liquid eyeliner On the Hunt (true black) will give you that 1960s look but Mac Cosmetics was already out of all the liquid eyeliners ($22) by Saturday.  On my purple-themed day I tried the Trip the Light Fantastic powder Highly Illogical (golden plum with fine pearl) but Strange New Worlds for my red and gold day ($34). For eyeshadow, I got To Boldly Go both days (reddish copper with sparkle) but if you’re doing science blue they also have Midnight (cobalt blue with pearl). 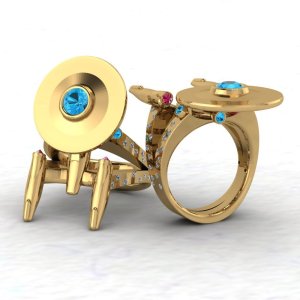 If you have some extra cash, you might try the limited edition gold Enterprise by Paul Michael at Geek.Jewelry. Starting price is $1,695 for the yellow 14K gold and topaz.

If you want to better understand the “Star Trek: The Original Series” universe, I recommend the dense “These Are the Voyages” Volumes 1-3 and binging on TOS which is available on Netflix. To better understand the Star Trek universe in general, besides binging on all the series, watch “The Adventures of Buckaroo Banzai.” The 1984 movie was made after TOS had ended its run and opened in August after “Star Trek III: The Search for Spock” (June) that same summer.  “Back to the Future” trilogy fans will immediately recognize the oscillation overthruster as the basis for the flux capacitor. Less obvious, is the significance of the number 88 which looks like the title character’s initials BB. In Star Trek, “Buckaroo Banzai” is referenced in “Star Trek: The Next Generation”  and “Deep Space Nine.”

Locally, you might find some one-day events such as the Boston Red Sox in conjunction with Boston Comic-Con on August 12  or the San Francisco Giants on Sept. 16.

The EMP Museum in Seattle opened a new exhibition on May 21, entitled Boldly Go: Exploring Star Trek, as part of the 50th anniversary celebration. The fully immersive exhibition features more than 100 rare artifacts, set pieces, and props from the television series, spin-offs, and films; plus, state-of- the art interactives including photo and video ops.

This interactive touring exhibit which opened July 9 will immerse fans as cadets in a first-of- its-kind “Trek Tech” environment that showcases the everlasting relevance and impact of innovation and technology on tomorrow’s world. EMS Entertainment, the leader in interactive immersive exhibitions, is producing the experience at the Intrepid in NYC. The exhibition previously launched in May at the Canada Aviation and Space Museum (CASM) in Ottawa, Canada.

“50 Artists. 50 Years” features original photography, sculpture, illustration, graphic design, and more created by 50 different artists as an expression of their love for the franchise and the inspiration gained from it. Artists who contributed to the collection include digital artists Tom Whalen, Joshua Budich and Rocco Malatesta, sculptor Calvin Ma, and the late Leonard Nimoy. The exhibit will launched at San Diego Comic-Con and then go on a global tour. (http://www.startrek.com/art_exhibition)

The Official Star Trek 50th Anniversary Convention will take place on August 3-7, 2016 at The Rio Suites Hotel in Las Vegas. The non-stop five-day convention will host more than 100 Star Trek celebrities from TV and film and thousands of avid fans.

The Smithsonian channel will air its two-hour documentary, “Building Star Trek,” on September 4 (just four days before the Sept. 8 anniversary), 8 p.m. (EST) on the Smithsonian channel. Afterward, the documentary will be available online. The documentary looks at the Smithsonian’s efforts to restore the 11-foot USS Enterprise model from the original TV series as well as the EMP Museum’s restoration of the bridge and its museum exhibition. Scientists who are attempting to make Star Trek props reality are also included in the documentary to provide perspective of the cultural and scientific influence of Star Trek.

Destination Star Trek Europe will be the only official Star Trek fan event in Europe to offer fans the opportunity to meet the cast and crew, explore interactive exhibits, learn about Star Trek’s impact on science, space and technology, and enjoy parties fit for a golden anniversary. As part of the event, hosted by William Shatner at the National Exhibition Centre in Birmingham, England, fans will be able to take command of the bridge on the U.S.S. Enterprise NCC-1701 or NCC-1701- D, investigate a Borg hive, take charge of a Klingon Bird-of- Prey, explore a shuttlecraft, and see original props and costumes in the Destination Star Trek Museum.

Star Trek: The Cruise will offer 6 days and 6 nights of unique experiences including dramatic performances, comedy shows and concerts by Star Trek actors; intimate speaking engagements with leading scientists, influencers and experts; themed parties, nightclubs, bars, casinos and private islands; interactive games, screenings, and competitions. The cruise will sail out of Miami and heading to Cozumel, Mexico and the Bahamas. William Shatner will host the cruise and other Star Trek talent from across the franchise are expected to be on board.

Follow The Dragon Lady Files on WordPress.com
Join 8,623 other subscribers