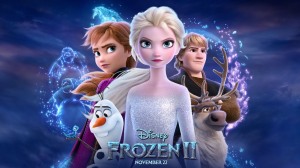 At some point, Disney decided that in “Frozen II” its two heroines, Elsa and Anna, could not reasonably accomplish their adventures in long skirts that hit the ground. So now, their travel adventure clothing are long tunics with leggings. That’s a fashion statement that diverges with the  reality of this vaguely pre-telephone/car era, but is a boon for young and old cosplayers everywhere. What “Frozen 2” has more romance and a threat to the fictional kingdom of Arendelle that can only be resolved by the sisters working together and there will be a happy ending.

What “Frozen 2” doesn’t have is great memorable songs (Bobby Lopez and Kristen Anderson-Lopez ). You won’t leave the movie theater belting out a ballad. You will leave with plenty of cosplay fantasies and a good feeling. You might even want to call your sister or brother.

The movie begins three years after the events of the first movie. If you need a refresher (You can visit this link for the full review), “Frozen” was about a princess, Anna (voiced by Kristen Bell), whose older sister, Elsa (Idina Menzel), has run away because Elsa has magical powers that can turn things into ice. She has trapped the kingdom of Arendelle in an eternal winter. Anna, along with a young ice harvester Kristoff (Jonathan  Goff), his reindeer Sven and a magically animated snowman Olaf seek to bring Elsa back. They are aided by the wisdom of the rock trolls who previously helped Anna and Elsa’s parents and one of the trolls, Bulda, adopted the orphaned Kristoff and Sven.

Later in the film, Anna is almost killed by Elsa’s magic, but the two are also betrayed by a prince named Hans (Santino Fontana) who plots to take over the kingdom by doing away with the sisters.

Now three years later, Kristoff is trying to find the perfect way to propose to Anna, but keeps on bumbling it and somehow ruining the mood. Elsa is Queen of Arendell, but she hears some strange voice in the distance.

Elsa and Anna remember how their mother Queen Iduna (Even Rachel Wood) and father King Agnarr (Alfred Molina) told them tales about an Enchanted Forest.  That was the sight of a great battle that their grandfather won and their father was mysteriously saved by someone he can’t identify. The reason for the battle is murky but it surrounds the celebration of the building of a dam that was to help people of the Enchanted Forest. The forest is ruled by nature’s spirits: air, fire, water and earth.

While only Elsa can hear the strange voice, all of Arendelle become afraid when the spirits of nature from the Enchanted Forest seem to have invaded their village. As the villagers leave, Elsa, Anna, Olaf, Sven and Kristoff set out to visit the Enchanted Forest.

Here’s where I’ll give a few spoilers. Water has memory, even better than elephants apparently and Elsa can unlock those memories. Anna and Elsa learn that their father was saved by their mother and their mother was originally from the Enchanted Forest. This is where her magic comes from and that’s why she’s more at home in the ice and snow.

We will meet a few new characters, of course. None of them evil, really. Two of the elements are represented by animals: fire by a blue salamander (We call it the “fire-wander”) and water by a water horse. Animators and horse lovers will want to see this beautifully rendered and animated horse.

While not as satisfying musically as the first movie, “Frozen II” is still a rousing adventure that shows how determined and heroic women can be and how we all need a little help from our friends and sisters (or brothers).

Full disclosure: I tried to buy Anna’s new travel costume, but it doesn’t come in my size but we did buy a blue salamander. It will likely remind you of a certain iguana named Pascal (“Tangled”).