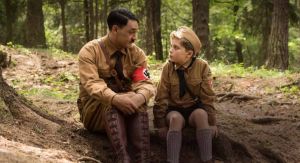 When you watched “The Producers,” did you ever think something like “Springtime for Hitler” was possible? “Jojo Rabbit” isn’t a musical , but it is  a comedy about a boy and his hero and imaginary friend, Adolf Hitler, and growing up and surviving treacherous times.

“Jojo Rabbit” isn’t a Mel Brooks movie nor is it based on the Mel Brooks movie. “Jojo Rabbit” is the product of an original comic auteur voice: Taika Waititi who has taken Christine Leunens’ story, “Caging Skies,” and brought it to the screen. Not having read the book, I’m not sure how faithful Waititi’s adaptation is nor if the lunacy in the movie is a quality borrowed from the book.

Both Leunens and Waititi share an inherited cultural. Leunens grandfather survived a German labor camp during World War II and she currently lives in New Zealand. The New Zealand-born Waititi is half-Jewish and half Maori. “Jojo Rabbit is one of the best World War II movies with plenty of lessons for adults and kids. As director and writer, Waititi manages to balance the pathos, the horror and the humor of this black comedy while playing a kid’s version of Hitler.

The titular character, Jojo Betzler (Roman Griffin Davis) is only ten when the movie begins. His mother, Rosie (Scarlett Johansson) encourages Jojo’s patriotism to a point, but what she doesn’t know is that her son has an imaginary friend is Adolf Hitler (Waititi). Jojo is not a total loser: he has a human best friend, Yorki (Archie Yates).

Yorki and Jojo attend a Hitler Youth camp which is run by Captain Klenzendorf (Sam Rockwell), a war hero who drinks too much and has an attraction to his second-in-command, Finkel (Alfie Allen). Fraulein Rahm (an outrageously racist Rebel Wilson) helps but these three adults can’t control the adolescent cruelty of the. older boys they sometimes leave in charge.

Roman Griffin Davis’ large brown eyes have that innocent anxiety of a rabbit unsure of its surrounding and his thick curls invite being stroked and tousled like a rabbit, but that’s not how he gets his moniker. While Jojo wants to be the best Nazi in camp, he fails when an older boy demands he kill a rabbit. The kids taunt Jojo, christening him “Jojo Rabbit.”

Jojo wants the rabbit to run, but an older boy kills it with a sharp twist of its head. Jojo runs instead. Luckily, Jojo’s imaginary best friend Hitler advises him that rabbits have admirable qualities as well. Jojo returns to prove himself, taking a grenade and throwing it, but it bounces off a tree and lands at his feet, exploding. As a result, Jojo’s face becomes a Picasso puzzle and he wakes up at the hospital, having been stitched up.

While recuperating at home, he discovers that his mother Rosie has a secret: His dead sisters’s friend, a Jew named Elsa Korr (Thomasin McKenzie), is hiding in a secret compartment. Elsa threatens Jojo and reminds him that the Nazis will kill his mother if Elsa is discovered. Jojo and his mother have seen collaborators hung in the town square.

Jojo and Hitler scheme of ways to get rid of Elsa. Jojo interviews Elsa, to help the Nazis and prove the anti-Semitic propaganda of the time. Over time, Jojo becomes disillusioned and begins arguing with Hitler.

This isn’t the first comedy that takes on the horrors of World War II. In 1997, the Academy Award-Winning Italian movie, “Life Is Beautiful,” focused on a father entertaining and tricking his son into believing the life in the concentration camp is part of a game.  The director and star, Roberto Benigni, who, with Vincenzo Cerami, co-wrote the script,  is the son of a survivor of Bergen-Belsen.

As with “Life Is Beautiful,” not everyone will survive in “Jojo Rabbit.” Waititi’s Nazis aren’t simplistically bad. The frustrated Captain Klenzendorf is a man in hiding, whose real inclinations would be condemned by the allies. Some of Jojo’s actions are selfish. Not everything is neatly tied up at the end either.

“Jojo Rabbit” is still a wonderful family film (PG-13) that deftly deals with weighty topics of hate and prejudice, oppression and love while exposing the ridiculous nature of racist propaganda.

“Jojo Rabbit” won the Audience Award this year at the Aspen Filmfest and the Grolsch People’s Choice Award at the Toronto International Film Festival.