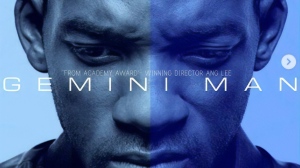 Do you remember those Double Mint commercials? They always suggested that twins were double the fun. “Gemini Man” doesn’t actually feature twins, but through the grace of CGI, Will Smith plays both the world’s premiere hitman and his younger clone.  In this action thriller, it’s more double or nothing and we get nothing.

I love Will Smith and thought his “Concussion” was underrated, but then there was “Aladdin,” but I’ll blame the screenwriter and the director that that one.

And Lee’s “Life of Pi” inspired me as a storyteller and a pie-maker, but I didn’t see “Billy Lynn’s Long Halftime Walk” (2016) and I wish I hadn’t seen “Gemini Man.”

“Gemini Man” introduces Henry Brogan on his last job for the Defense Intelligence Agency. On a silver bullet train is his cohort, and before the train enters a tunnel, Brogan must shoot and kill a terrorist. A young girl approaches the man and that delays Brogan’s shot until the last possible moment. Brogan meant to hit the man’s head; his bullet tore through his neck instead. Although hailed a hero by his agency for his impossible shot, Brogan retired to a ranch in Buttermilk Sound, Georgia.

The bullet train should signal we aren’t in the US. The subtitle tells us that the hit took place in Liege, Belgium. That should make you think about the CIA and its legacy of political meddling. The screenplay (by David Benioff, Billy Ray and Darren Lemke) does question the DIA’s interference but only because DIA governmental ethics have been breached.

Brogan slowly becomes aware that something is wrong when an old agency friend discloses an informant, Yuri (Ilia Volok) claims Brogan killed an innocent man. Brogan learns he is being watched by a female agent, Danny (Mary Elizabeth Winstead), who is posing as a boat rental manager.  You know what’s coming next, right? Brogan and Danny will be on the run as all the people on the last operation are murdered.

Brogan finds one opponent especially hard to shake and when he sees his face, conveniently reflected in glass, he is shook up as well: He sees a younger version of himself.  The younger version is known only to us as “Junior” and he’s been adopted by one of Brogan’s former colleagues, Clay Varris (Clive Owen). Varris is the head of a black ops unit, code named: Gemini. The man assassinated in Belgium was a researcher on the project who  objected to ethical decisions and didn’t read the writing (on the wall) about Clay and retirement plans.

With the help of Baron (Benedict Wong), a former colleague who has access of a variety of airplanes, Brogan and Danny try to figure out what’s happening and their way to a happy ending after numerous explosions and deaths of mostly faceless secret ops force members.

The best thing that can be said about this film is that is solidifies the pronunciation of the word, “Gemini,” for those who have been watching old newsreels and programs about the NASA space program (1961-1966) which followed the Mercury program and preceded the Apollo missions.

“Gemini Man” isn’t a good film; it has some watchable action sequences, but those are in between a lot of close-ups of Will Smith and his perplexed face–both older and younger versions. Dare I say it? The chemistry just isn’t there.