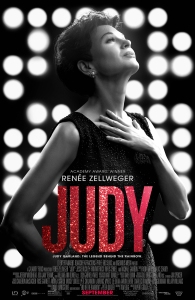 On stage at the Ahmanson, Peter Quilter’s play “End of the Rainbow,” is about an outsized personality on a collision course with young corpse-hood, but this version of Judy Garland had been prematurely aged by drugs, lack of sleep and alcohol. She wasn’t leaving a pretty corpse. The cinematic adaptation gives us “Judy” as a title, seen in technicolor glitter red, the name gives us both the girl in the ruby red slippers and the boozing woman slipping toward death in her final money-making engagement.

Tom Edge’s screenplay is serviceable enough, but Rupert Goold decision to give us something that theater generally cannot–unforgiving closeups of star Renée Zellweger–makes this a painful exercise. It’s like one’s on dermatological exploration, mapping out the pores and wrinkles of Zellweger’s face. In a Hollywood that still worships youthful women, that’s a brave decision, but perhaps better suited for another film.

The movie begins with Garland performing with her two kids, Lorna (Bella Ramsey) and Joey. All the glitter is in their clothes; their dressing room is the pantry at the back of a kitchen. The smiles on stage change to tired frustration as Garland drags her kids to an expensive hotel, but she is refused. Her unpaid bill resulted in her suite being cleaned out and put back into use; her belonging were put in storage. In desperation, Garland ends up knocking at the door of the kids’ father, Sidney Luft in Brentwood. By 1968, Luft and Garland had been divorced since 1965. Rightfully Luft is concerned about child custody issues; it’s a school night and Garland blithely remarks the kids slept in a cab. Motherhood isn’t an easy costume change.

Garland only got $150 for her one-nighter and that is quickly spent but she still needs a place to stay. She ends up crashing at a party of her older daughter, Liza (Gemma-Leah Devereux), where she meets the attractive Mickey Deans (Finn Wittrock). He’s a fan with an entrepreneurial spirit and he’s handsome enough to catch the eye of women and men. Judy is needy and childishly contrite and charming and marriage number five will come soon enough.

In flashbacks, we see a young Judy (Darci Shaw) being bullied, badgered and beguiled by her adult minders, including a date with a different Mickey, Rooney–one that would die still married to wife number 9 in 2014.  The female chaperone reminds her not to eat because she’ll get fat and the oily head of studio alternates between praise and cutting criticism; he’s a psychopath serving a compliment sandwich. While the situations are frightful, the scenes themselves are rather bland.

That diet of pill-popping and emotional abuse most certainly shaped the adult Judy but so did her desire to perform. The movie’s melodrama comes when Judy flies to London to perform at an upscale nightclub, Talk of the Town. The money will save her, but who will save her from herself? She has a minder, but Rosalyn Wilder (Jessie Buckley) isn’t quite up to handling this well-practiced drug addict. Into this tragedy enter two clowns, a gay couple (Andy Nyman and Daniel Cerqueira) who have splurged to see her every night. Their moment with Judy will have fans patiently waiting at the stage doors everywhere.

This is a divergence from the play where her manager-soon-to-be husband and the tour piano player are the pill-popping prevention team. Extracting that leaves little for her future husband to do and while there is a piano player, he’s been mostly relegated to the background. A movie can, of course, more easily move to different locations than a stage play and gives us an idea of her high-life vagabond lifestyle and her utter desperation. The flashbacks are not always wasted. When the tired child Judy is drugged so she can keep practicing choreography is juxtaposed with a performance where the deadness in a highly functioning drunk Judy’s eyes suggest she is on autopilot, we feel the extent of her childhood tragedy. Moreover, comparing the nasty crowd that throws food at Judy to the deep adoring loyalty of the gay couple reminds us that there were fair weather fans before social media and the volume of nastiness was more contained in the 1960s.

The closeups will be punishing for fans of Garland or Zellweger. By her forties, Garland had developed physical and vocal mannerisms, which Zellweger inhabits and at times Zellweger’s Garland seems like a human puppet manipulated by muscle memories more than really feeling the music. The emotional center isn’t Judy and her caregivers as it was in the play, but Garland and her audience and that’s a cold embrace by a crowd comprised of some who only wanted to see the legend and those few who loved her despite her vulnerabilities and obvious addiction problems. Sure the ending is a tearjerker, but in “Judy,” Garland is always really alone.

If you don’t mind a grueling ride, and a Hollywood treatment of a legend during her journey to her final train wreck, “Judy” might be worth the ticket to ride. If you fondly recall the Olivier Award-nominated play, you might want to keep away and remember the magic. “Judy” premiered at Telluride and opens Sept. 27, 2019.