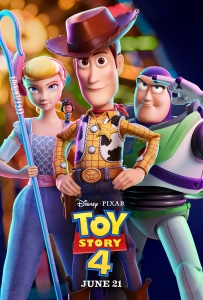 “Toy Story 4” is a beautiful story about love, old friends and new beginnings, loyalty and love again. Toy Story has been Woody’s story, one that has gone on for more years than most toys are lucky to last. Woody has always been motivated by love and sometimes jealously, but always love. For those who enjoyed the 2013 “Toy Story of Terror,” this movie mixes in elements of horror stories, some of which are imaginary, none of it is spooky scary. Instead there’s a gentle sweetness about what all the toys will do for love.

The Toy Story series has been a long journey beginning in 1995 under the direction of John Lasseter for the first two.

The 1995 “Toy Story” was about the competition between Sheriff Woody (Tom Hanks) who feels he has been replaced by Buzz Lightyear (Tim Allen) as his child Andy’s (John Morris) favorite toy. After knocking Buzz off the window, Woody must save Buzz because the other toys believe Woody tried to murder him. Through Woody’s attempts to save Buzz, Buzz and Woody become friends.

In the 1999 “Toy Story 2,” Woody gets stolen by an unscrupulous toy collector and Buzz and Andy’s other toys must save him.

Directed by Lee Unkrich, “Toy Story 3” saw Andy Davis preparing for college and his toys accidentally given away to a daycare center that is ruled by a mean teddy bear, Lotso (Warren Beatty). Although Andy’s toys escape, Andy gives them to Bonnie Anderson (Emily Hahn).

While Andy’s toys now belong to Bonnie (now voiced by Madeline McGraw), “Toy Story 4” begins nine years earlier when the toys still belong to Andy and Andy is still a boy very much attached to Woody. Andy has been playing outside, when it suddenly begins to rain and Andy accidentally has left one of his toys outside. Woody and Buzz along with the seldom seen Bo Peep (Annie Potts) organize a harrowing rescue.  But Bo Peep’s little girl no longer needs her and Bo Peep ends up in a box going to donation somewhere and she bids Woody a sad farewell.

In the current time, Woody spends much of his time in the closet with Bonnie favoring Jessie Joan Cusack), even giving her his sheriff badge. Woody’s position as the leader of the toys is slipping and he sadly remembers when he was treasured and loved. On the day of Bonnie’s introduction to kindergarten–a one day prep class before summer vacation, Woody slips into Bonnie purple backpack and helps make her day happy by providing her materials to make something in class. What she makes is Forky (Tony Hale). Because Forky is her only friend in class, Bonnie values him but Forky suffers from an identity crisis. He knows he’s a disposable utensil and throws himself into the trash. Woody retrieves him, trying to explain that Forky is now a toy and toys exist to make their kids happy.

While Bonnie and her family take their camper and go on a vacation trip, Forky throws himself out of the window. Woody follows and on the trip to the camp ground, Woody tells Forky about his life as Andy’s treasured toy. Woody and Forky pass the Second Chance Antique store and Woody recognizes a lamp that used to decorated with Bo Peep and her three sheep. Slipping in to look for her, he finds sinister toys that threaten his and Forky’s return to Bonnie.

With Woody gone, Buzz “listens to his inner voice” and tries to find Woody, but ends up in a traveling carnival being captured and then fleeing with two new plushies–Ducky (Keegan-Michael Key ) and Bunny (Jordan Peele)

Bo Peep will be found and Woody will find love but sacrifices will be made and the hammy Duke Caboom (Keanu Reeves) will fulfill his “I Canada” destiny and perform a stunt worthy of Evel Knievel (if the late Montana-born Knievel was Canadian and stuck in the 1970s).

Pay special attention to the gathering of legendary comedians who get to voice their alter egos in pun: Mel Brooks as Melephant Brooks, Carol Burnett as Chairol Burnett, Carl Reiner as Carl Reineroceros and Betty White as Bitey White. This quartet come on early as toys that Bonnie has outgrown.

The film is dedicated to Don Rickles (1926-2017) who voiced Mr. Potato Head and animator Adam Burke (d. 2018 from cancer). Pixar used archival material to make Mr. Potato Head’s dialogue with the family’s encouragement. Under the tender direction of John Cooley (story board supervisor for the 2015 “Inside Out” and director for the 2015 short “Riley’s First Date?”), there’s a real family of friends feeling to the whole movie.

We’ve watched these characters grow and develop. Friendships have been formed. Adventures had strengthened their bonds and always the toys wanted only to be loved. You’ll probably leave the theater feeling a little sad, but also with a warm, squishy feeling, but be sure you stay until the very end of the credits for the grand “I Canada” finale.